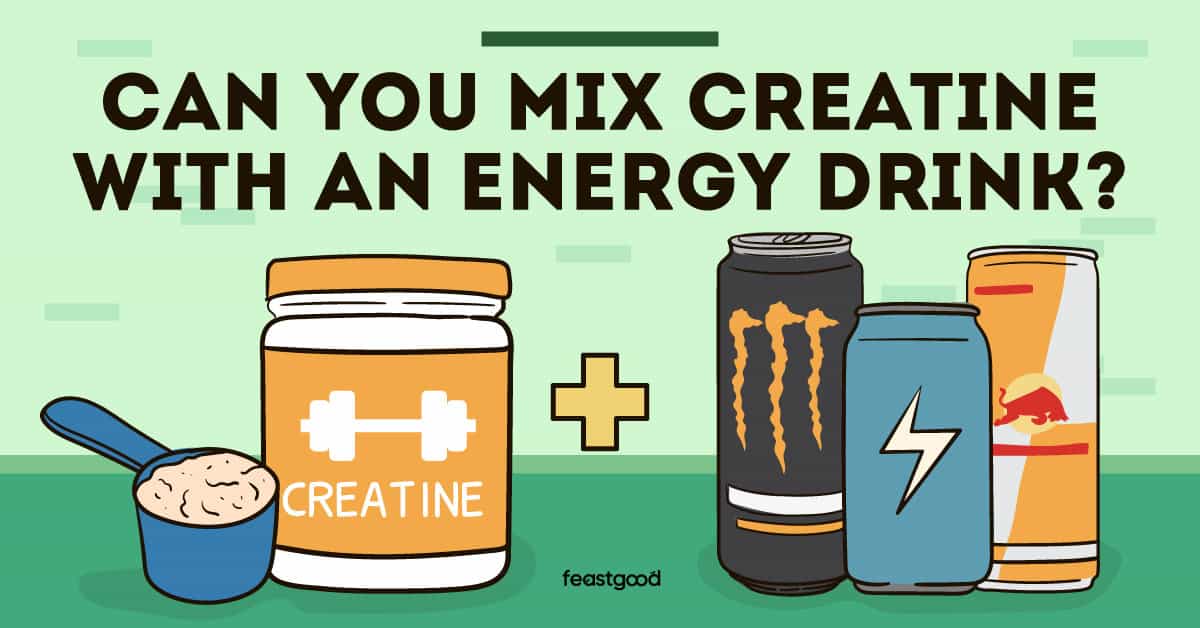 Before you decide to start mixing your creatine into an energy drink it’s important to understand what type of creatine to mix and when the best time to consume it is, so that you’re getting the most benefit.

Benefits of Mixing Creatine With An Energy Drink

The benefits of mixing creatine and an energy drink are that it:

One benefit of mixing creatine with an energy drink is that it increases your level of alertness, which can be beneficial if you need to stay awake and be mentally prepared.

The caffeine in energy drinks along with the sugar can increase your energy levels and cause you to feel more alert, which can be helpful if you’re preparing for a workout, working an overnight shift, or just feeling like you’re crashing in the afternoon.

Another benefit of mixing creatine with an energy drink is that it boosts performance because the caffeine in energy drinks increases physical endurance and the creatine increases muscular strength and power.

Mixing creatine into an energy drink is the perfect performance cocktail for improving athletic performance because the boost in endurance will help you to sustain your efforts for longer periods, and more strength and power will help you to lift heavier weights and become more explosive.

The combination of creatine and an energy drink can be beneficial for your brain health and function since both of these ingredients have positive effects on your cognitive function.

This could be beneficial in the short-term for when you have a mentally challenging task to tackle, but long-term, it could also be beneficial because as you age cognitive function naturally declines.

Drawbacks of Mixing Creatine With An Energy Drink

The drawbacks of mixing creatine and energy drinks are:

One drawback of energy drinks is that they’re very high in sugar, which can increase your risk of diabetes, high blood pressure, and obesity if over consumed.

Some energy drinks have 50 to 60 grams of sugar in a 16oz serving, which greatly exceeds the recommended daily amount (RDA) for sugar in a single serving. The RDA of sugar for women is 24 grams and for men it’s 36 grams.

Therefore, a single energy drink has around 2 times the amount of sugar than is recommended. This isn’t a concern if you’re only mixing creatine with an energy drink every once in a while, but if it’s becoming a daily routine then it can cause issues.

If you want to consume energy drinks with creatine more frequently, then I suggest choosing a sugar-free energy drink instead of the regular version to decrease your sugar intake.

If you’re someone who is anxious to begin with, it’s best to avoid energy drinks because you’re more likely to experience excessive levels of anxiety when mixing them with creatine.

Instead, try mixing your creatine with gatorade which is caffeine-free and less likely to increase anxiety.

Risk Of Heart Issues If Over Consumed

One major concern with mixing energy drinks and creatine is that if over consumed it could increase your risk of different heart and blood vessel issues because of the energy drink itself.

Although energy drinks are consumed regularly by many people with no reported effects, it’s likely that these individuals had no health issues to begin with, but those who have underlying medical conditions have a higher risk of responding negatively to energy drink consumption.

Therefore, it’s best to be cautious when drinking energy drinks especially if you’re doing it regularly. If you’re questioning whether you should drink energy drinks or not, then talk to your doctor first.

Creatine & Energy Drinks: When To Consume

Although there are benefits to consuming energy drinks, the benefits are very dependent on when you consume it.  Let’s take a look at a few scenarios.

Is Creatine Mixed With An Energy Drink Good for Pre-Workout?

Creatine mixed with an energy drink is best to consume pre-workout because it increases alertness, boosts energy, and improves performance which is ideal for a workout.

I recommend taking the creatine mixture about 40 to 60 minutes before your workout because it takes this long for the caffeine to reach its peak effects.

Is Creatine Mixed With An Energy Drink Good for Post-Workout?

Creatine mixed with an energy drink post-workout isn’t as beneficial as consuming it pre-workout because after a workout the goal should be to wind-down and recover.

The sugar in energy drinks would be beneficial because it would help to quickly replenish your energy stores that would have been depleted from the workout.

However, it lacks a protein source which is required for repairing muscle damage that would have occurred while working out.

All in all, there’s nothing wrong with having creatine mixed with an energy drink after a workout but it’s certainly not the best time to consume it.

Is Creatine Mixed With An Energy Drink Good Before Bed?

Having creatine mixed with an energy drink is not a good option before going to bed because the caffeine in the energy drink will negatively affect your sleep quality.

Sugar and caffeine before bed are not a good combination if you want a restful sleep, so it’s best to avoid mixing creatine with an energy drink before bed. In fact, I don’t recommend consuming caffeine within 4 hours of bedtime for a better quality sleep.

Who Should Mix Creatine With An Energy Drink?

Mixing creatine with an energy drink is appropriate for those who enjoy energy drinks and want to take creatine to build muscle, increase their power output, and improve their cognitive function.

Who Should Not Mix Creatine With An Energy Drink?

Those who are sensitive to caffeine or that have been advised by their doctor not to consume energy drinks should not mix creatine with an energy drink.

Those with any health issues or suspect an underlying health issue shouldn’t mix creatine with an energy drink because it could result in a more negative outcome than a positive one.

For these individuals, there are many better options available for mixing with your creatine like milk.

Will Creatine Dissolve In An Energy Drink?

Creatine dissolves better in warm water than it does in cold liquids, but it will eventually dissolve into an energy drink if you mix it well using a frother.

If you don’t have a frother then you could mix it in a shaker bottle with a ball but we all know what happens when you shake a carbonated drink, so if your energy drink is carbonated then be prepared.

The highest-quality source of creatine on the market is creatine monohydrate because studies have shown that it produces the best results compared to other types of creatine.

If you want to add creatine to an energy drink yourself then I recommend using PEScience’s TruCreatine, which is made with creatine monohydrate and is third-party tested for ingredient purity and label accuracy so that you know exactly what you’re consuming.

There is also the option to purchase energy drinks that already contain creatine, which would be convenient because you wouldn’t have to buy the creatine and energy drink separately.

However, the sources and amounts of creatine in these ready-made versions don’t hold a candle to making your own creatine and energy drink mixture.

The most popular creatine energy drink on the market is Bang Energy Drinks.

Bang energy drinks are advertised as a creatine energy drink and they come in a variety of flavors (which are all delicious); however, there has been some discrepancy over the amount and source of creatine in their energy drinks.

The company that manufactures Bang Energy Drinks (VPX) hasn’t disclosed how much creatine is actually in their drinks.

Additionally, the source of creatine in the drinks is actually Creatyl-L-Leucine which is basically creatine bonded to the amino acid leucine. There is currently no scientific evidence that this type of creatine is even absorbed by the body, so it could be a waste.

I would drink these energy drinks purely because I like the taste and they’re a source of caffeine, but I wouldn’t recommend them for replacing your creatine supplement.

What Happens When You Mix Creatine & Caffeine?

Mixing caffeine and creatine is perfectly safe as long as you can tolerate caffeine and are a healthy individual. In fact, mixing creatine and caffeine could significantly improve the quality of your workouts if taken pre-workout.

Which Energy Drinks Have Creatine?

Other Ways to Take Creatine

2 Protein Shakes A Day: Pros, Cons, & Should You Do It

Carb Cycling vs Keto: Which Is Better? (5 Differences)